Emanuel Sanders seemed almost too excited to be in the end zone after last Sunday’s touchdown at Tennessee. If the offense can’t get in the end zone, can it get into the playoffs?

At Tennessee, Emanuel Sanders took a pitching stance, wound up, and hurled his fastball. (And that got an “official” stance as well.) See tweets below.

The Broncos are not exactly in first place at 8-5, and now they face these last three teams: The Patriots, The Chiefs (IN KC), and The Raiders.

So, here’s the question for fans in Broncos Country Wyoming Division.

Does Denver get into the playoffs? 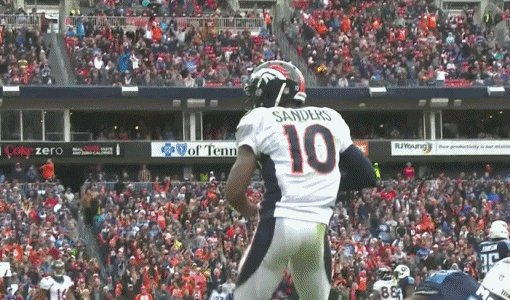 .@ESanders 10 Plus fastball. Develop your off-speed stuff and maybe there'll be a #SpringTraining invite in your future.